skip to main | skip to sidebar

Its been a few days since I've posted so I thought I would update a little on my life in general.

Gallbladder Issues - First lets start out by letting you all know that while I was pregnant with my son my gallbladder decided to go kapooey on me. If any of you have ever had a gallbladder attack you know how painful they can be. I was about 4 months along when I had my first one and I thought for sure that I was miscarrying. It hurt so bad I was curled up in a ball on the floor in the bathroom occasionally hanging my head over the toilet and vomiting. The only way I know to describe the pain is that it feels like someone was taking a serrated knife and stabbing me through the chest and out my back combined with nausea. I went to the emergency room and they couldn't figure out what was wrong with me, they suggested that it might be heartburn so we stocked up on antacids. Over the next few months the "attacks" became more and more frequent and the antacids did NOTHING to help. I went to the ER again when I was 8 months pregnant and this time they did an ultrasound and found multiple gallstones but told me there was nothing they could do about it while I was pregnant unless it became an emergency situation. They sent me home with vicodin. The last few weeks of my pregnancy were the worst with an attack at least every other day. Then I had my son and they all but vanished. Its been six months and I've had only two minor ones since then. Well on Monday I went to see a surgeon about it because we are planning to get pregnant again and I REALLY don't want to go through that again. He scheduled me to have it removed Jan 5th.

Baby Boy Stuff - The baby's next Dr appt is on Friday so we get to see how much the little chunker weighs now. Everyone says he is so tiny but they don't have to lug the guy around! LOL

Hair - My friend Valarie and I went to get our hair cut today. Every time I go in I tell them that I want something different with a lot of layers but I always end up with the same haircut I had before only shorter so this time I explained that to the girl and she was totally up for the challenge of giving me a new look. You can see the before here in this picture (I'll explain next what the picture is of.) 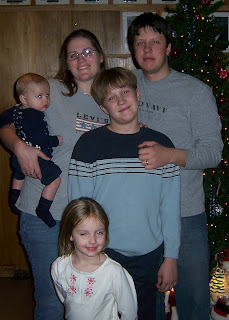 and here are a few after shots... 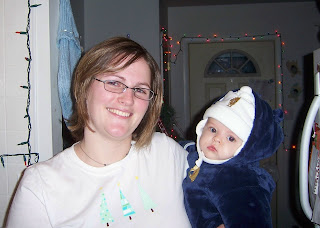 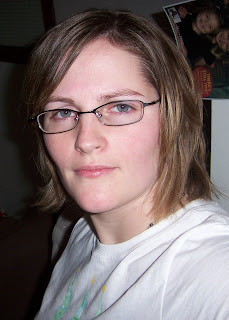 Alex - Ok, now to explain that first family picture. My stepson Alex is 11 years old and for extra credit in school he wrote a paper on what it meant for him to be an American citizen. The paper was then submitted to an essay contest and he won first prize for Lake County, so then the essay is sent on to the state level and he won again! I believe it is currently in Nationals but we won't know how he did until some time in January. The picture is of the family at his award dinner in his honor where they presented him with a savings bond. In the photo is me, my husband and the kids.

FREEBIE! - You had to read through (or scan) all of that and now you get your reward! Today's Freebie is a cute little set of 4 Christmas Chipboard Tiles. Please leave a comment if you Download these and enjoy! 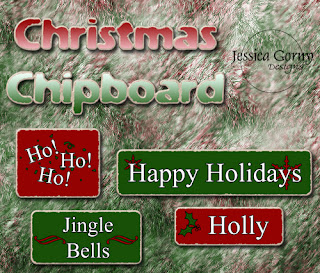 *Special thanks to Atomic Cupcake for use of their chipboard action.*
Posted by ~Jessica at 4:24 AM

First ..I am soooo sorry about you going through all that pain with the gall bladder.That has to be awful.:( But I agree with you ..get that taken care of before the next pregnancy.:)

Second...I love these chipboards..they are really cool! Thank you for sharing them with me:)

So sorry to hear about your troubles. I had a friend who went through that and I saw the pain it caused her.

On a lighter note - love the hair - I have the same problem with them never wanting to do something different.

Thanks for the Christmas goodies!

Jessica I've put you in my prayer's, I know how it feels with thw gall stones before I had mine out every time I had an attack I thought I was having a heart attack.
I'm so glad that you finally made it thru with the pregancy
Thank You for sdharing your awesome chipboards!

Great chipboards - thanks a lot.

UGH....I feel for you with your gallbladder hon. But definately take care of that soon, it's nothing to mess around with. Love the freebie, thanks for them. Have a wonderful (healthy) holiday!!

Thanks so much for the chipboards!

CUTE haircut! Congrats to your stepson; you all must be so proud. I like your chipboard tags, but I am Christmas-ed out. We don't celebrate it, so I need very little to document our friends pictures etc. Thanks for sharing though :-)

First of all thank you for the freebies, they are wonderful! Secondly, about the gallbladder, I cannot believe they did that to you. They wouldn't perform a laproscopic procedure but yet they gave you Vicodin when you were pregnant? Buncha morons if you ask me (which I know you didn't but still...lol) I had cancer when I was pregnant with my second son and they performed surgery on me - it was cervica - they kept me awake and wouldn't give me any pain killers afterwards. That is unreal. I had my gallbladder removed about 12 years or so ago I had one gallstone which was just about to rupture because it was the same size as the gallbladder - I hear you about the pain. Thank God you and baby are all right.

1 sorry to hear about the gallbladder, good luck with the surgery, hubby says laparoscopic way is far easier than he expected.
2 I love the hair, so pretty
3 ty for freebies, i love them,
g

Thank you, Jessica. I was just wondering if I could find anything like that today. I am doing a quick page for my granddaughter and needed some - so - double thank you.

I oh so know the pain you have been having.... and I cant even imagine having it while preg. I wouldnt have survived... as I thought I was dying as it was..... Needless to say I had an ER visit finally and ended up with emergancey Gallballder surgery first week in OCT. was not even in the hospital 24 hours... and was back to normal for the most part a week later.... So hopefully for you, you too will have a speedy recovery... I will keep you in my prayers.... Just know you will be so happy once it is done and over and NO MORE PAIN :-)

Take care of yourself
Julie

Yep! Gall bladder attacks are no fun! You'll feel much better after the surgery! :)

And thank you for the chipboard. Love 'em! :)

Thanks for the chipboards!!!
Sorry to hear about your gallbladder, get well soon!
Congrats on your son's award!! Wish him luck with the next step!

Sorry to hear about your gallbladder issues, but it will get better in January! Love the pics! What a Beautiful family! Congrat to your son and prayers he wins in Nationals!

Love your hair! I know that rut, and I can't get out....congrats on being able to get out!

Thanks for the goodie!

Thanks for the cute freebie!

Thank you for the wonderful offerings - your work is gorgeous. I'm seeing it for the first time - it's really beautiful!! Kudo's!!

Congratulations to your stepson!! Your hair looks good like that too!
Thanks for the great chipboard words!

Thank you Jessica for the wonderful freebies! I hope your upcoming surgery will take care of your gallbladder pain!

This is so creative. I've seen more and chipboards, but you're the first one I've seen that did a Christmas one. Thank you for sharing this wonderful set of elements.

Hope you are feeling better soon. My thoughts are with you.
Thanks for the chipboard labels. They are adorable!

Thank you for the cute chipboard. I wish you well with the gall bladder surgery and congrats to Alex for his win.

Ohhh...I love these. Thank you :)
I really think your haircut looks great!

Ohhh, those gall bladders can be terrible things!! My mom had a horrible time until her surgery years ago, but she's as good as new now, so I'm glad you're getting the surgery done soon! :) Best wishes for the surgery & recovery!

TFS your wonderful designs - I love them.